Meet me at the ‘Pol ‘on a Sunday morning 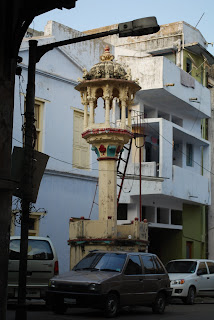 With a sketchbook in hand, a camera on the shoulder and money in their pocket,-three strangers of varied age groups chance upon one another at the Desai Ni Pol in Ahmedabad.

The eldest of them is a grandfather from the western part of the city, another, an architect but a writer and the youngest of them is a curious, school going teenager, precocious and image conscious. The only common factor between them is their journey to discover the heritage in the older preccints of Ahmedabad, where the famous Pol houses meander through the winding streets of the old city. Their intentions well spelt, their journey begins from the entrance to the Desai Ni Pol. A conversation seeker, the architect asks the grandfather, Did you know that, Ahmedabad was built on a flat surface of the earth with few water bodies in or near it? It seems clear that river Sabarmati became the key feature in the formation of the city and most of its dominant elements are located on the eastern bends of the river. What do you think about it Sir? Deeply engrossed in observing the intricate detail of the carving on the 600 year old wooden bracket, the older manner affirms that it was indeed the river that caused a radial pattern of the streets. Developed during the reign of Mohammad Begada, the city gates were connected with the Central area, the present Jumma Masjid and the Manek Chowk. Also within these fort walls, various areas were handed over to the commanders to develop into self sufficient housing units which today are gloriously, called Pols.

Weren’t these pols called purs? Asked the precocious teenager in an ‘all-knowing’ tone. It was much later that it came to be known as pols since the houses were compactly organized in the meandering dead end streets”, he ends with an air of confidence. The architect benevolently adds to his knowledge, “This is because of the political and communal insecurity that forced the people of the city to seek internal security in these streets where they grouped themselves into small communities based on religion and caste.”

The exploring trio now reaches the interiors of the Pols, and find themselves in front of a brightly colored wooden entrance door. “Well, this, 250 yr old house of a Soni Community is declared as a Heritage House by the Ahmedabad Municipal Corporation,” announces the architect authoritatively. The grandfather in the meanwhile, discovers that the idol of Lord Ganesh, kept in the niche next to the door, is the oldest idol in the entire pol! The teen is fascinated by the beauty of the door as he feels reluctant to enter through it. He queries, “Why is there a courtyard in the centre of the house?” To which the architect explains, “A typical pol house generally opens towards a central courtyard which provides all its light and ventilation and forms the focus of the house.”

“And that central courtyard is where, where Brahma resides. He showers knowledge through his light”, pipes in the eldest family member of the Soni house. The grandfather emotionally moved to see a joint family system still prevailing in a “small” house. The teen is flabbergasted as he fails to find the bourgeoisie living room, dining room, and kitchen; forget about a separate children room! As they enter the first floor through a wooden staircase, the architect is dumbstruck by the beauty of a tall blue colored wooden window. The projected balconies open out to the colorful streets giving an unblocked view of the low rise houses.

“The definition of “privacy” is very different for the Pol community my boy’ explains the grandfather to the teen while leaving the house. Armed with photographs, conversations and the warmth of the people, the, the trio continues towards more such armaments.

The architect makes a note of a full size blue colored windows, the underground water tank for water harvesting and the intricate carving on the entrance door. They pass through many wooden carved facades and huge brightly colored entrance doors. “The domestic architecture of the walled city of Ahmedabad is typified by the use of wooden elements, starting with the threshold platform, that includes columns, beams and brackets”, explains the architect. “Also, most of the architectural elements are wooden and carved in various degrees of intricacies”, adds the grandfather.

The kids in the pol follow them excited and awaiting their turn to be photographed, while the aged ones on the otlas (the concrete platforms outside the houses) watch, undisturbed and with an air of déjà vu., only to stir a bit as they sense their routine getting interrupted. As they move further, they are interrogated by many and welcomed by some like Mr. Himanshu Mehta whose house is like a museum. “I have seen this house before. I suppose this has been shown in the famous movie, Gandhi – My Father”, exclaims the teen. “You are absolutely right. Some part of our living room has been shown in the movie”, declares Himanshu Mehta with pride.

The house is a double-storeyed structure with a double height central court sporting a swing in the middle, surrounded by rooms on both the floors “It seems you have taken a lot of care to restore your house,” marvels the grandfather as he checks out the details on the rod of the antique swing. “Yes I have. This is a 300 year old house .It’s as precious as my kids”, informs Mr. Mehta. “We did shift to the western part of the city for four years but we opted to come back. It was unthinkable to live anywhere but here. After all, home is where the heart is”, adds Mrs. Mehta.

The house has large bedrooms even larger bath rooms with a tinge of antique interiors .As they walk around in the house the teen exclaims in disbelief, “A separate room just for to keep utensils!!!”

“Well, these are not just bronze vessels. It’s a collection of my great grand fathers that has been preserved and restored. Some of them are even older than this house!” says Mehta rather grandly. Impressed by the care and detailing in preserving objects and the architecture in the house, an attempt is made to try and find a discordant note. “But don’t you find the kitchen smaller as compared to other areas of your house?” asks the architect. Mrs. Mehta is quick in her repartee, “Not really. There is an existing chimney and we never had to provide any exhaust. Plus the living area is too spacious to experience any such commotion.

The trio move on, very touched by the hospitality of the Mehtas. “They are too sweet to us. I would never allow someone to enter my house at their own convenience.” Announces the grandfather. As they near the end of their journey, they come across a beautiful Hanuman temple. The temple priest informs them that this is no common temple but is a VISA temple! “If you have problems regarding your passport, visa or any other documents then all you have to do is place the documents in front of Lord Hanuman and you are sure to get your VISA”, enlightens the pujari.

The architect and his two friends take the Lord’s blessing from the VISA temple. Their journey ended, they part ways and return to the new City. One cannot help pondering about the impact of the Pol visit on the trio. Will the grandfather continue to rue over the thriving joint family system? Will the teen now consider ‘sharing his room with his siblings? Will the architect ever be able to see a life beyond eaves and brackets? Or will they ever think about the fact that the Pols brought them together in conversations that are far and few in the new city? The Pol houses are a living testimony to the imaginations of community living, of a passion for workmanship, preservation of memories, and legacies, and respect for life as continuity, like the Sabarmati river that no longer exists as water, but lives through the meandering streets of the Pol houses.